Home The Daily Blog Keith Locke Free speech for everyone, from Charlie Hebdo to the jihadists
Facebook
Twitter 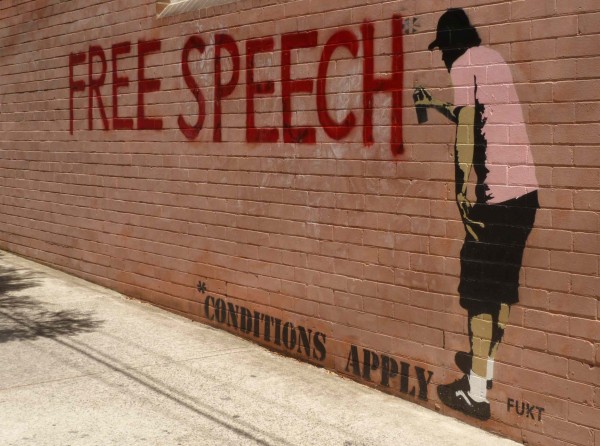 Our commitment to free speech is most tested when we defend the rights of those we strongly disagree with. In that respect it is good to see so many people defending Charlie Hebdo’s right to publish following the massacre at their office. A highlight of the global solidarity effort has been the million-strong march in Paris today, attended by many world leaders.  It’s good to see a double theme to most actions, with the defence of free speech going hand in hand with a promotion of cultural and religious tolerance.


Many progressive commentators are critical of Charlie Hebdo

, saying its cartoons are often racist, sexist and homophobic, yet these commentators have still, rightly, defended the magazine’s right to publish them.

A good way to remember those who died would be more consistent in our defence of free speech – and expose and remove the restrictions on freedom of expression that have crept into Western societies under the guise of the “war on terror”.

for “promoting terrorism on Facebook.” Judge Peter Birts sentenced Runa Khan for “disseminating terrorist material with the clear intention of radicalising others.”

If we really believe in free speech we have to defend the right of extremists on both sides of the argument, be it the Charlie Hebdo cartoonists fostering Islamophobia or Islamic extremists propagandising for jihad. After all, it is better to settle disputes by debating with words (or cartoons) than with guns. Denying the free speech rights of Islamic extremists only makes it more likely that some of them, living in the West, might actually resort to arms.

Our societies become much stronger if the full spectrum of political views is given a hearing, and it is useful to hear what grievances have driven people to extreme views. Understanding their grievances, and helping rectify them to the extent they are valid, is the path to greater social harmony. The prejudice against Muslims living in France and their economic marginalisation has made extremist solutions more attractive to some Muslim youth – as has French support for America intervening militarily in the affairs of Muslim nations.

, Patrick Cockburn points out how the Syrian and Iraqi conflicts “have provided a seedbed for Islamic extremism” and stresses the importance of a ceasefire between Syrian government and non-jihadi rebels. It means Western nations “accepting that they are not going to overthrow Bashar-al-Assad and Assad accepting that he is no going to win back all of Syria.”

It’s not only Britain that is restricting free speech in the on-line world.

where people have been imprisoned when their on-line posts have been interpreted as supporting terrorism.

The right to publish what some might consider offensive material, whether on-line or in the print media, is something we should cherish. As the Sunday Star-Times pointed out yesterday, we have to keep fighting for a free media and the rights of us all to freedom of expression. The Star-Times editorial listed some of the ways our journalistic freedoms are under challenge here. Police have been in action against journalists, raiding newsrooms over the Key/Banks cup-of-tea conservation, and taking away files from Nicky Hager’s home following the hacking of Cameron Slater’s emails. Journalist Jon Stephenson’s phone calls were monitored by the Defence Force because of critical reporting on Afghanistan, and Fairfax reporter Andrea Vance’s email, phone and access card records were handed over to an official leak inquiry.

We still have a lot to do at home to protect our freedom of speech.

Why Green MPs shouldn’t give their parliamentary questions to National