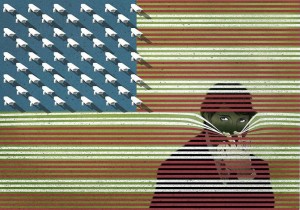 , following the suspension of military and police cooperation.

Tony Abbott doesn’t seem to understand that the world is changing and Australia can longer simply push around South East Asian nations, and spy on them at will. How would have Tony Abbott have reacted if the boot had been on the other foot, and Indonesia had been listening to his confidential phone conversations (or those of his predecessors)?

Australia may think that, as America’s “deputy sheriff” in our region, it has a free hand to spy on anyone, and doesn’t need to apologise when caught. But as America has found out already, from both Germany and Brazil, spying on the leaders of friendly countries is not risk free.  The Anglo-American alliance (supported by Australia, Canada and New Zealand) is not as powerful as it thought it was.

Last Tuesday, I wrote the following letter to Prime Minister Key, asking him to be proactive, given that it is probably only a matter of time before the Snowden papers expose New Zealand’s spying on friendly governments in South East Asia and the South Pacific. Clearly, the Waihopai satellite communications interception station does such spying, with the information obtained (including on Indonesian communications) being passed on to the American and Australian governments. Do we really want our relations with South East Asia and Pacific Island governments damaged in the same way we see happening to Australia?


I am writing to ask you to be proactive regarding the issues posed by the revelation that Australia has been spying on the phone calls of the Indonesian president and other Indonesian leaders. The Indonesian government is furious and has called back its Ambassador from Australia. Relations between Australia and Indonesia are at a low ebb.


This clearly has implications for New Zealand’s relations with Indonesia and other Asia/Pacific states. New Zealand is a member of the Five Eyes network and at least three of its members have now upset friendly governments through spying on their leaders. The Brazilian president Dilma Rousseff cancelled a visit to Washington when it was exposed that the the US National Security Agency had been intercepting her telephone calls. American and British relations with Europe have suffered in the wake of revelations that the NSA and the British GCHQ have spied on European governments, even to the extent of spying on Angela Merkel’s cell-phone.


Inevitably, governments in our region will soon be asking whether New Zealand, as a Five Eyes member, is spying on them, or helping Australia to do so. It is no secret that that the Waihopai spy station conducts mass interception of international phone calls passing through communications satellites located over the Pacific – and that information about these calls is passed onto New Zealand’s Five Eyes partners. It seems likely, from what has been said over the years, that New Zealand does target the communications of Pacific Island leaders to gain political and economic intelligence.


The understandably hostile Indonesian response to the spying on its President shows the huge downside of such political spying. It is both morally repugnant and disruptive or normal bilateral relations between friendly nations. It is hard to see much benefit from such spying when governments in our region are fairly open about their intentions.


New Zealand can learn from Tony Abbott what not to do. Abbott’s response further enraged Indonesia because he wouldn’t even comment on the evidence, let alone apologise to Indonesia. Instead he said that “all governments gather [such] information”. Indonesian Foreign Minister Marty Natalegawa responded to Abbott’s justification by saying “I have news for you. We don’t do it.”


I would suggest that instead of waiting for proof in the Snowden documents that the GCSB has spied on the communications of other governments, or helped Australia to do so, that the Prime Minister be proactive and issue a statement of clarification. You could then announce an independent inquiry into the role of the GCSB, its participation in the Five Eyes, and whether its current operations are hurting more than helping New Zealand’s interests.


What is the benefit of being part of the Five Eyes if it has the potential to upset every government in South East Asia and the Pacific Islands, none of whom appear to be interested in intercepting in our government communications?