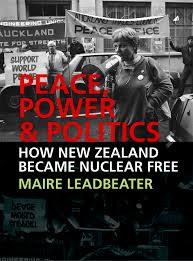 Is life with John Key getting you down? Are you losing faith in New Zealanders’ ability to change things? Then I have an inspirational book for you. “Peace, Power and Politics: How New Zealand Became Nuclear Free” by Maire Leadbeater. Just out from Otago University Press.

Our Kiwi anti-nuclear movement never got despondent and eventually got the politicians on board to change our law and make us nuclear free. One of the photos in Maire’s book summed up the spirit: nuclear-free peace walkers are crossing the Huka Falls with a banner reading: “If the people lead the leaders will follow”.

Want to learn about protest tactics? The peace movement has tried most of them in that creative Kiwi way. Many of them turn up in the book, often accompanied by quirky illustrations. There are some 200 photos, cartoons and poster reproductions. You (or someone you know) will probably be in one of the photos.

I was particularly taken with the chapter on the Peace Squadron, which sent out dozens of boats to get in the way of incoming US warships. One of the most dramatic photos in the book is of Stephen Sherie raising his arms in triumph as he runs along the top of the nuclear submarine Haddo in the middle of Auckland harbour. The submarine had already been hit by yellow paint bombs. Peace Squadron leader, the Rev George Armstrong, said that after Sherie hopped onto the sub from his kayak: “He looked puzzled and even pained for a moment. Then a kind of ecstasy dawned upon him. Like Zorba the Greek he began a dance, half of defiance, half of joy, on the very nose of the incoming sub, a nose by this time streaming with yellow radiation-colour paint. The first Auckland newspaper to report the day’s events carried the banner headline: “Boarded – Hot welcome for a yellow submarine.”

Art and music were a big part of the protest movement and it was great that the movement’s troubadours, Jools and Lynda Topp, were able to sing their anti-nuclear anthems at the Dunedin launch of Maire’s book last week.

If you want to celebrate the book’s launch roll up to one of the following events:

[Disclosure of family bias: Maire Leadbeater is my sister]