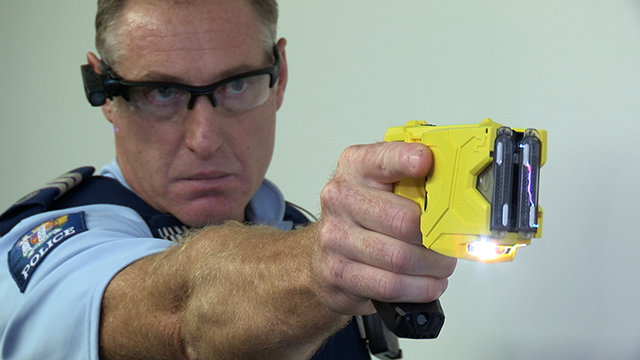 Why now, was the question many people asked when the Police announced that every front-line officer would soon have a taser. After all, our violent crime rate has been dropping.

Even though there is now less violence in the community, expect taser use to increase when all front-line Police are issued with the weapon. Expect also to see more inappropriate use.

When tasers were brought in a few years ago, we were told they would only be accessed to prevent

– to the Police, a suspect or a member of the public. .

Now Police often pull out their tasers in essentially non-violent situations, when suspects are challenging their instructions, or delaying an arrest. This was true in the Mark Smillie case, where a Whakatane man was tasered in his own front yard as he argued with the Police. Smillie’s complaint

by the Independent Police Conduct Authority.

The taser is such a frightening weapon that most people comply with police instructions when it is pointed at them. So it is tempting for officers is to present a taser simply when someone is being uncooperative. That may have occurred many times last year: there were

when officers pulled out a taser without actually firing it.

Seeing a taser on an officer’s hip, and knowing it can be pulled out at any time, will make people that little bit more wary of Police. That can make it more difficult for Police to get the community cooperation they need to prevent and solve crimes.

I worry about what might happen on political protests when every officer has a taser on his or her hip. If policing of the protest doesn’t go to plan, as it often doesn’t, officers will be tempted to pull out a taser. But this would exacerbate most protest situations, precipitating more problems than it solves.

Finally, we should not forget that tasers are a very dangerous weapon and can kill people: particularly those with dicky hearts. We await the coroner’s report of

a Napier man who died in March

The Police boast the low injury rate for tasers. But when there are injuries they can be very serious, and even fatal. Also, let us not forget the psychological trauma suffered by everyone who has 50,000 taser volts pumped through them.

The evolution of parliamentary security