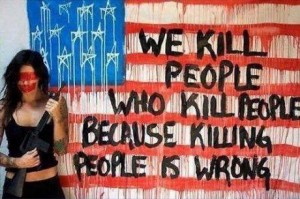 It’s almost a reflex reaction for Western powers to respond to a significant terrorist event with stepped-up air strikes, as France has done.

However, around the world more people are coming to the realisation that this isn’t the answer.

blocked London’s Whitehall in opposition to David Cameron’s plan to follow France’s lead. Cameron hasn’t yet got parliamentary backing for his plan.

It appears that the latest French air strikes have impacted on the local Syrian people more than ISIS.

that while the French strikes had hit (abandoned) ISIS bases, “electricity and water have [also] been cut off as supply lines were hit too.” He went on to say that, “Last week, Russian air strikes destroyed one of the main bridges in the city in addition to the national hospital. Most hospitals in the city have been destroyed in Raqqa… The US, Russia and France are all bombing Syria. How many more countries want to bomb us?” Such destructive Western bombing, as well as being unconscionable, is counterproductive because the anger that it generates among the locals provides thousands of new recruits for ISIS.

Why, you might ask, can’t the Western powers more accurately target the “bad guys” and their military assets, and leave the innocent civilians alone.

The simple answer is that the party being bombed always disperses and hides its military assets. There are no functional barracks to bomb. For the Western bombers government buildings then become the targets, even those supplying services to the population. This has been true of every bombing campaign since Vietnam where one party has an airforce and the other party doesn’t.

Inevitably, many innocent civilians are killed in such bombing, although

United States doesn’t admit to many such casualties

. It has been left to

NGOs to do the counting

.  Some American officers do admit to lack of true military targets in Iraq and Syria.  In October Lt Gen. Bob Otto, a US air force deputy chief of staff, noted that the coalition was “challenged in finding enough targets that the airplanes can hit that meet the rules of engagement.” He was worried that “if you inadvertently – legally – kill innocent men, women and children, then there’s a backlash from that. And so we might kill three and create 10 terrorists.”

The message carried by the London protesters on Saturday was that there has to be a better way. One of the participants,

that British air strikes in Syria would not help advance what is really required, and that is “a comprehensive negotiated political settlement of the Syrian civil war.” Such a settlement would isolate ISIS and stimulate more local opposition to its rule.

How to reduce violence in our prisons