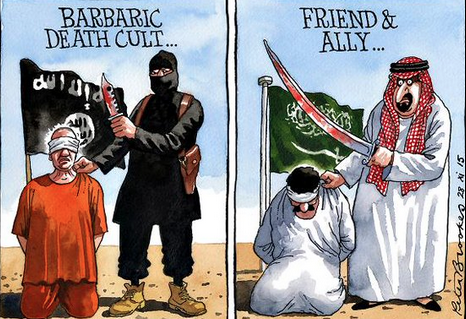 A year ago, in late March, Saudi Arabia began bombing Yemen with the aim of overthrowing the Houthi-led government in the northern half of the country.

The bombing has devastated this poor country, with

the World Health Organisation reporting that

: “Since March 2015, more than 6200 people have been killed and 30 000 injured. More than 21 million people – 82% of the total population – are in need of humanitarian aid, including almost 2.5 million people who have been internally displaced.”

that schools, hospitals and water and electricity facilities have been targeted. And a UN Panel of Experts has documented 119 air sorties that violated the rules of war.

We all know the brutal character of the Saudi regime, at home and abroad. So what has been the New Zealand government’s response to this murderous assault on the Yemeni people?

When he visited Saudi Arabia a month after the bombing began

which placed sanctions on the Yemen’s Houthi-led government while studiously avoiding any criticism of the Saudi bombing.

Western powers (including New Zealand) have played a shocking role in the Yemeni disaster.

Billions of dollars worth of British and American military equipment

has poured into Saudi Arabia for use in the war. Meanwhile the US has provided what it called “logistical support” for the Saudi bombing.

As has happened in other countries, such indiscriminate bombing has only increased popular support for the Houthi-led government, with

in the Yemeni capital a week ago.

As I write there is now some prospect of a

which might lead to an end to the Saudi-led air and ground assault on Yemen, and hopefully fruitful negotiations between the political antagonists within Yemen.

A good move from New Zealand would be to apologise to the Yemeni people for supporting the murderous Saudi aerial bombardment. But don’t expect this any time soon from a Key government entranced by the possibility of a free trade deal with the Saudi dicatorship.