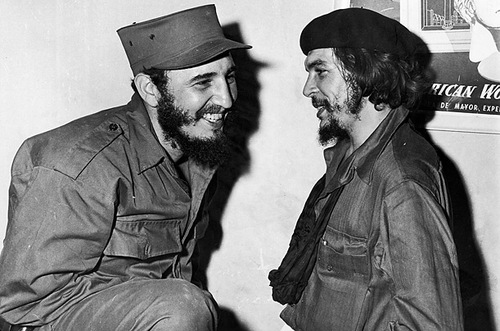 When he dismissed Fidel Castro as a “brutal dictator” Donald Trump again showed how out of touch he is. Most of the world is mourning the death of Cuba’s revolutionary leader.

Fidel was widely admired for resisting every attempt by America to overthrow his revolutionary government in a small country situated just 125 kilometres south of Florida.

in his tribute, “Fidel stood up and strengthened his country during the harshest American [economic] blockade” and took “a path of independent development.” French president Francois Hollande

America wasn’t trying to depose Fidel because he was a “brutal dictator”. In the first few decades of the Cuban revolution, the United States was supporting right-wing military dictatorships across Latin America. Fidel’s “crime” was to nationalise American firms in Cuba and set out on a socialist path.

The good outcomes for Cubans have been widely recognised by world leaders.

“Cuba achieved 100% literacy many years ago and built up a health system that is one of the most admired in the world. With economic growth rates similar to many other Latin American countries, inequality and poverty are much less pronounced in Cuba than in surrounding nations.”

Higgins said Fidel Castro also sought to offer an alternative global economic and social order. He recalled Fidel “speaking of how it was possible to eliminate global hunger and the enormous burden international debt was placing on impoverished nations” saying: “Let us pay the debt to humanity, not the debt to the banks.” Such talk didn’t go down well in New York or Washington.

“Cuba’s record of international soldidarity abroad. Castro’s achievements were many. For all his flaws Castro’s support for Angola [which included troops] played an crucial role in bringing an end to Apartheid in South Africa.”

that Castro “inspired the Cuban people to join us in our own struggle against apartheid.”

Cuba is appreciated by most governments for its sacrifices to help others, including sending thousands of doctors to many less well-off nations, including in the South Pacific.

Recognising Cuba’s achievements and helping it end the US economic blockade will also improve its democracy. Some of the political restraints evident in Cuba today are in reaction to the blockade and reflect Fidel’s long-standing fear of division when Cuba confronts threats from its northern neighbour.

At time of writing I haven’t found a NZ government tribute to Fidel Castro. It would be a shame if they can’t say something good about him, a couple of weeks after National rammed through Parliament a motion welcoming the election of Donald Trump.

Perhaps John Key say something similar to the Irish president Michael Higgins, who said: “Fidel Castro will be remembered as a giant among global leaders whose view was not only one of freedom for his people but for all the oppressed and excluded peoples on the planet.”