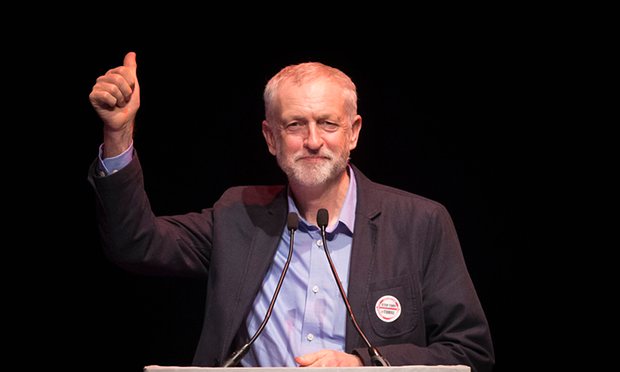 For anyone pessimistic about the possibility of progressive change, Jeremy Corbyn’s epic victory should be a confidence boost.

to remain as Britain’s Labour leader was achieved in the face of bitter daily attacks from every branch of the mass media, and from a majority of his fellow Labour MPs.

The victory represents a fundamental transformation of the British Labour Party, from one led by timid centrists to one led by a man, Jeremy Corbyn, prepared to challenge the British establishment. Jeremy Corbyn’s opponents have focused on his alleged personal weakness rather than admit that his policies are hugely popular. As Owen Jones put it

in the Guardian yesterday,

the anti-Corbyn faction “should acknowledge that investment not cuts, tax justice, public ownership and a foreign policy that prioritises peace are now cornerstones of Labour party policy”.

on housing his re-election plank

was to “build a million new homes in five years, with at least half a million council homes, through our public investment strategy. We will end insecurity for private renters by introducing rent controls, secure tenancies and a charter of private tenants’ rights, and increase access to affordable home ownership.”

Corbyn’s critics, including those in New Zealand, harp on about how a party he leads is “unelectable”. But rarely do they explain which of Corbyn’s policies don’t resonate with the general public. The reality is that his policies are wildly popular and have led to an explosion in Labour membership. At over half a million members the UK Labour Party is now the biggest political party in Europe.

With such popular, progressive policies British Labour now has its the best chance in years of defeating the Conservatives, perhaps in an arrangment with the Greens, the Scottish National Party and Plaid Cymru – and even the Liberal Democrats.

But, the critics say, the Labour Party’s poll ratings under Corbyn are abysmal. In reality it is amazing that Labour is only

when dissident Labour MPs have been attacking their leader in the mass media every day. What would Labour’s poll rating be here if Andrew Little was under such constant assault from within his own caucus?

And therein lies the problem. The Labour Party now has a more progressive, engaged membership, but the parliamentary caucus remains dominated by the centrists. Refreshing the caucus with new, progressive MPs will take some time, but it can’t be shied away from. The more immediate task is to stop centrist MPs taking over the shadow Cabinet and blocking Corbyn’s promotion of progressive policies. It would be a denial of Corbyn’s political mandate from the party if the caucus was allowed to elect a shadow Cabinet hostile to him.

Corbyn’s people are often labeled old-fashioned and accused of going back Labour’s failed policies in the 80s. And there is some resemblance between Corbyn’s stance and the pre-neo-liberal policies of UK Labour. But the best placement for the  Corbynistas is in the forefront of the “new politics”, progressive politics attractive to a new generation. The Corbyn for Leader campaign was massive. One of those involved,

In preparation for next year’s election New Zealand’s Greens and Labour would benefit from studying the Corbyn campaign.

In Britain, Green MP Caroline Lucas welcomed Jeremy Corbyn’s re-election and said “we look forward to working with Jeremy to oppose the Conservatives and to bring about a progressive Government at the next election.” Incidentally the Green Party candidate in the Oxfordshire by-election (to be held following David Cameron’s resignation) is

Engaging with the review of intelligence legislation

David could improve the Labour/Green relationship

Our nuclear-free campaign continues to inspire