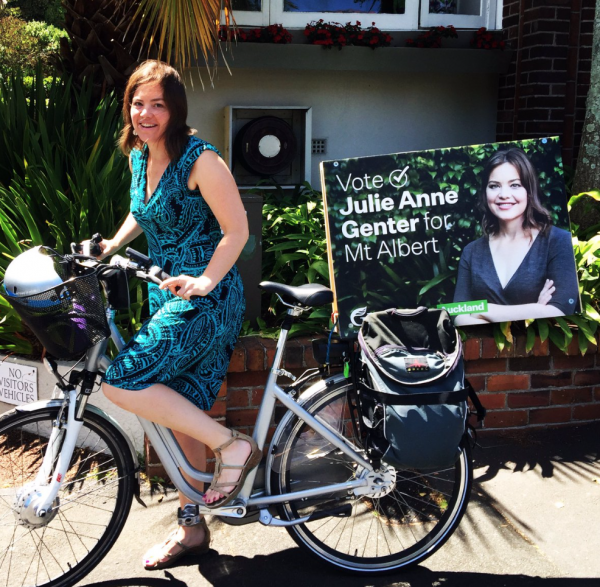 There was a low turnout in Mt Albert by-election, mainly because the government parties, National and ACT, didn’t even put up candidates. Sitting in a polling booth as a Green Party scrutineer, I pondered why those that did vote even bothered.

I observed they all seemed happy to vote, grasping the opportunity to have a political impact. But what was the message they were sending?  I thought back to the Northland and Mt Roskill by elections, where NZ First’s Winston Peters and Labour’s Michael Woods won by big margins.  The main message Mt Albert voters were sending (like the Northland and Mt Roskill voters before them) was that they weren’t happy with the National government. And what was the simplest way for them to do this? Bulk up the vote for most prominent anti-government candidate, Labour’s Jacinda Adern.

Assessing whether the Green policies were better than Labour’s was probably a secondary consideration for most voters, and the media downplayed any differences, instead stressing the chumminess between Adern and the Greens’ candidate, Julie Anne Genter.  And then there was the “Jacinda” effect. Julie Ann was up against Labour’s most popular and endearing MP, often touted as a future Labour leader. In this context, the relatively low vote (11.5%) for Julie Ann is understandable.

It will be different in September’s general election, with more scrutiny of party policies, including the differences between the Greens and Labour.  However, the Mt Albert by-election result should prompt the Greens to put more effort into differentiation.

Now that a Labour/Green coalition is being promoted, top-of-mind should be the fate of all other “minor” parties that have had a governmental relationship with a bigger party.  All of them (United, New Zealand First, the Alliance, ACT and the Maori Party) have subsequently seen a big decline in their party vote as a result of the hook-up. Perhaps the main lesson should be taken from the Alliance experience, where a year out from the 1999 election a Labour/Alliance government was projected. The Alliance vote fell from 10.1% in 1996 to 7.7% in the 1999 election.

In my opinion it is important for the Greens to continue to challenge Labour’s orthodox economic model, where success is measured by GDP growth. This leads to bad Labour policies, including supporting deep sea oil drilling, excessive dairy farm intensification, and trade and investment treaties that serve corporate interests.

Also, in the age of Trump it will be popular to distance ourselves from the American military and intelligence establishment, which unfortunately both National and Labour are wedded to. Such a challenge doesn’t require any new Green policy, only an articulation of what exists. For example, current Green party intelligence policy is to close the Waihopai spy station, withdraw from the Five Eyes intelligence network and abolish the GCSB (while devolving the GCSB’s useful cybersecurity function to a new independent agency.)

Green policy is also for getting rid of the frigates, which are only useful as part of a US-led combat flotilla and waste hundreds of millions of taxpayer dollars each year. The frigates are out of synch with the rest of our navy, which is geared to fisheries patrols, conservation work, and disaster relief in South Pacific and Antarctic waters.

It’s certainly right to project a Labour/Green coalition government.  But the closer the relations between the two parties the more important political differentiation becomes – conducted in a fraternal manner, of course.

. Advocating that a candidate not run because they might win is not something you expect from a democrat.

Martyn Bradbury didn’t think a win for Julie Ann Genter was necessarily the most likely outcome. Oddly for a political pundit

he covered the field in his predictions

I was mind-boggled when Martyn predicted, with the entry of Geoff Simmons, that

“Labour are suddenly in danger of losing this electorate”

and Simmons could be “coming through the middle”. Every other commentator realized that the TOP party could only be a bit player. It ended up with 4.7% of the vote.

Martyn also mistakenly predicted serious friction between the Labour and Green candidates. But as it turned out, the debates between Jacinda and Julie Ann were conducted in an exemplary way, as noted by every other commentator. Martyn had described as

that there would be “a new age of respectful politics where Julie Ann Genter and Jacinda Adern would skip hand in hand into meetings and in between braiding each others hair and guitar sing alongs, would have a polite debate about the policy issues that show cases blah blah blah.” How wrong could Martyn have been.

that “why [the Greens] chose to stand is still not clear at all.” Well, Martyn, it’s very straight forward, and applies to all the parties that stood in the by-election whether they won or lost. The leafleting, door-knocking and political debating that make up an election campaign enables your party to reach voters with their message and win greater support for this and future elections. Parties that don’t run lose that opportunity, as National, NZ First and ACT did in Mt Albert.