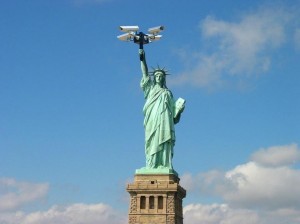 Once upon a time we thought we had a right to privacy. That was before the global reach of American electronic spying had been fully exposed. Now we’re told we’ll just have to live in a world where privacy no longer exists for people, corporations or governments. And we’re not supposed to complain because supposedly every government is involved in spying, in its own national interests.

Leaving aside for the moment the ethics and legality of governments spying on other governments, it is hardly an equal contest.

Only the United States has been able to afford to construct such a huge electronic spying apparatus and be aided by much of the global internet traffic passing through accessible US-owned cables or via accessible US-owned firms such as Google, Microsoft, Twitter or Facebook. Add to that the American advantage of having the UK, Canada, Australia and New Zealand (the other four countries in the Five Eyes network) collecting vast amounts of data for them.

that “The NSA seems to be listening everywhere in the world, gathering every stray electron that might add, however minutely, to the United States government’s knowledge of the world.” No target is off limits. The New York Times reports that when Obama sat down with UN secretary-general in April to discuss Syria, the NSA had already provided him with Ban Ki-moon’s talking points for the meeting.

Most world governments, particularly in developing countries, do not have the capacity, or the will, to conduct this sort of spying, which is one reason why the Indonesian government is so incensed at the latest revelations of

Australia electronic spying on its government

. New Zealand may well have assisted in this spying either through its Jakarta Embassy or through the Waihopai spy station intercepting some of Jakarta’s international satellite communications.

Although New Zealand might be a member of the Five Eyes it would be stupid to think that the NSA conducts spying for anything other than American interests. How was it in New Zealand’s interest for the NSA to spy on German president Angela Merkel, when New Zealand probably has more in common with German than American policies on climate change, renewable energy, international affairs and human rights?

, as disclosed in the Snowden papers, it was hardly to check the risks of Petrobras conducting deep sea oil drilling off the New Zealand coast. It would more likely be to help US oil drilling firms like Anadarko gain some advantage over Petrobras.

One informative thing about the latest disclosures from the Snowden papers is that it shows the targets of the NSA’s electronic spying (and probably those of the GCSB) are primarily other governments, political movements and foreign firms – not “terrorists”, which was the excuse previously used by John Key and Co.

The Back bencher – a pub across the road from Parliament