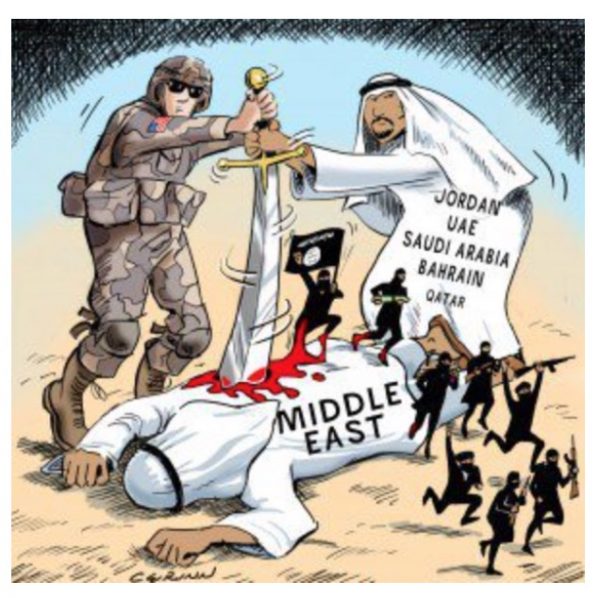 The first casualty of war is the truth. That’s certainly true of America’s war on Yemen.

at least five women and 10 children.

Yet all most Americans know about the raid is that one American commando, Ryan Owens, was killed.

Owens was lauded by Donald Trump

in his February address to Congress, with the cameras focusing on his grieving widow, Carryn. The ever-patriotic American media claimed that this was moment Trump became truly presidential.

Actually, the raid was a disaster in all respects. The war in Yemen is a many-sided conflict, with three main players: the Houthi-led administration that controls north Yemen and the Saudi-backed forces, and Al-Qaeda in the Arabian Peninsula, both of whom control territory in the south.

Men in the village of al Ghayil were paid by the Saudis to resist the Houthis, who control territory just north of them. So by killing those men the SEALs were killing their allies, because America supports the Saudis. There is evidence that Al Qaeda fighters may also have been present in al Ghayil.   Some villagers also sympathise with Al Qaeda, on the grounds that they are taking on their main enemy, the Houthis. It gets very confusing in a three-sided conflict.


Iona Craig of the Intercept travelled to al Ghayil

to interview the villagers. She reports that when the SEALs opened fire at 1am in the morning, the locals mistakenly thought it was the Houthis invading and returned fire.

“The gunfight had lasted the better part of an hour. It would be another hour or more before the skies fell silent and the sound of helicopters, aircraft, and drones faded. It was in the dawn light that the mass of bodies was revealed, the missing accounted for, and dead children identified.”

One of the unlucky ones was Abdallah al Ameri, who was the groom in a December 2013 wedding ceremony which was attacked by US drones, killing 12 guests. Abdallah survived on that occasion, but was killed in the latest raid.

US drone strikes have continued over south Yemen through February and March. They are both murderous and counter-productive. Iona Craig reports that such raids have made the villagers in al Ghayil angry with the American government and “that dog Trump”.

It is shameful that the New Zealand government supports the American/Saudi war on Yemen, which is causing such suffering. The UN reports that

. Millions have been displaced, primarily as a result the Saudi bombing of homes, hospitals and other infrastructure. It is a catastrophe.