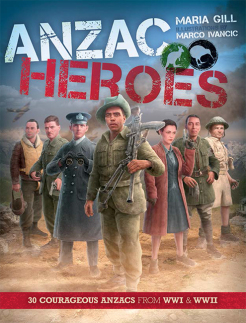 My mother would have been critical of this year’s winning book,


, by Maria Gill (which also won the Margaret Mahy award for children’s Book of the Year).

Elsie Locke was a leading peace campaigner and a founder of the Campaign for Nuclear Disarmament.  Elsie Locke’s book,


, celebrates those Kiwis who opposed war – from pre-European times, through World War I to the Vietnam war.


, while well written and presented, steers away from any criticism of the wars the ANZACs fought in. Maybe she thought it was not part of her remit. However the result, even if it is not intentional, is an endorsement of New Zealand’s participation in World War I. Reinforcing that endorsement, the Kiwi soldiers profiled in the book, who did fight bravely, are put on a pedestal as “heroes”.


the real heroes are those who spoke out against the war, like Peter Fraser (later our Prime Minister) who was imprisoned for sedition. There is not a single mention in


of the thousands of New Zealanders (Maori and Pakeha) who opposed World War I, many of whom went to prison as conscientious objectors or opponents of conscription.


assumes that World War I was a just war. Peter Fraser, by contrast, saw the war as being between rival capitalist powers in which the workers had no interest. Fraser saw the war as “the ruling classes of Europe spreading woe, want and murder over the continent, and it is time the working classes of different nations were rising up in protest against them.” [

As with many war books,


sometimes glorifies the killing of “enemy” soldiers. For example when Sgt. Richard (Dick) Travis saw a German machine gun post he “rushed forwards, shooting with a revolver in each hand, killing seven men. A German officer and three men raced around the corner, and he killed them as well.” His unit “killed 50 enemies in all…” In such accounts the German dead feature only as statistics.

But why were New Zealanders even fighting in World War I? Was it right? This question is not even addressed, except in two sentences: “When Britain went to war, they [New Zealand and Australia] committed themselves to defending the Empire. Politicians worried that the war would spread to their shores and wanted to support the Empire’s effort to prevent that from happening.”

Gill says nothing about how nonsensical it was to think New Zealand would be invaded. Or whether it was right for New Zealand to commit troops at the cost of thousands of Kiwi lives and thousands of Turks and Germans on the other side. Or whether it was right to fight for an Empire that treated “enemy” soldiers as less than fully human – and subjugated hundreds of millions of people in India and its other colonies.

Yes, one can admire the bravery of soldiers in World War I, the soldiers on all sides. But they shouldn’t be treated as “heroes” unless the cause they were fighting in was just. In World War I the cause was not just. It was pointless mutual slaughter, with the victors needlessly humiliating the losers and laying the ground for the Second World War.

By treating our ANZAC soldiers in the First World War as “heroes” Gill’s book miseducates its young readers. It was a war that had many victims, but no heroes. We should mourn those who died, but not glorify any of those who did the killing.

All that being said, my mother Elsie Locke would have graciously accepted the decision of the judges in favour of


, and maybe agreed with the judges on such things as its writing quality or its high “production and design” standards. She would not have acted censorially the way some did when Ted Dawe’s


won the Margaret Mahy children’s Book of the Year back in 2013. But I’m also sure she would have welcomed a public debate around the pro-war implications of


.  My mother may even have contributed something to that discussion.

: While I am critical of the angle of this particular book, I would like to commend Maria Gill as a prolific writer of educational books for children, including several with social and environmental themes, like


The Last of Maui’s Dolphin