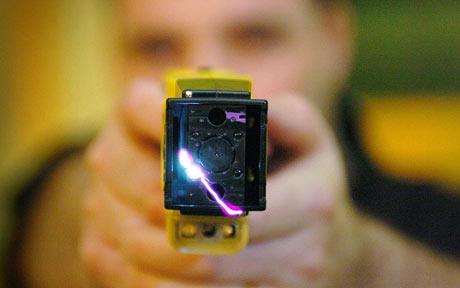 reinforce the fears we had when tasers were introduced.

Christmas Day 2011 was not a day of cheer for Whakatane man Mark Smillie. The IPCA reported that on that day Mr Smillie:

Was driving too fast, and was then chased by the Police, but managed to get to his Whakatane home.

Was then pepper-sprayed and batoned on his own property.

Was then tasered for an agonising 13 seconds (after the officer kept his finger on the taser trigger).

Was then tasered a second time (he was on the ground during both taserings).

It appears the officer got angry when Mr Smillie wouldn’t cooperate with being handcuffed.

Mr Smillie said he didn’t assault the officer [and the evidence appears to back him up].

One of the things I anticipated back in 2006, when the first New Zealand taser trial began, was that this fearful weapon would be used for “compliance” (to get alleged offenders to do what the Police told them) even though it was only supposed to be used when there was a danger of serious injury to the someone in the vicinity.  During that year-long taser trial there were cases where people were being tasered for not being cooperative with the arresting officer.  In other countries (

) police complaints officials have noted a similar slippage in the Police interpretation of their mandate, towards using tasers to induce compliance.

There is a great temptation for Police to use tasers for compliance because when threatened with a massive electric shock most people will do what the Police want.  It is notable that most of the times the Police have pulled out the taser it was pointed at a person (called “laser painting” with a red dot on the target’s chest) rather than fired at that person.  In the 552 taser “events”

(the latest figures available) the taser was fired in only 13% of the cases.

The use of tasers for compliance probably much more than it is being used in really dangerous situations is one of the strongest arguments against the Police having this fearful weapon. The downside for all of us is that the way Police use the taser is breeding  community distrust (as in the Smillie case) when to prevent and solve ordinary crimes the Police need the cooperation of ordinary people. This mistrust of Police is greatest in Maori and Pacifica communities, because Maori and Pacifica people make up 65% of the individual taser targets, according to Police statistics.

Resorting to tasers also tends to run counter to traditional policing, where officers would try to calm down a situation, or back off while awaiting reinforcements (as the officer should have done in the Smillie case). An officer armed with a taser is more inclined towards an aggressive response.

There is also danger of serious injury from taser use in that a quarter of the targets in New Zealand are mentally ill people, and another quarter are people on drugs. The circulatory systems of such damaged people tend to be more stressed and their heart can be seriously damaged by the 50,000 from a taser racing through them, as has been noted in the international literature.

Most disturbing is the Police hierarchy’s reaction to the IPCA decision against them. They refuse point blank to apologise to Mr Smillie, and say they will not discipline the officer concerned, as recommended by the IPCA.  This can only encourage more Police misuse of this frightening weapon.

It’s true that taser use has saved some people from serious injury, but on balance the downsides of taser use (and misuse) seem to outweigh the upsides.