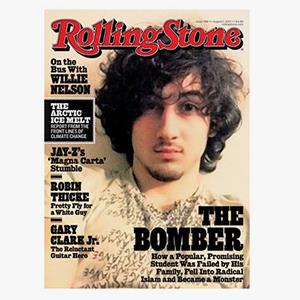 In vengeful America, Rolling Stone has got into all sorts of trouble for running an attractive

of one of the alleged Boston Bombers, 19-year-old Dzokhar Tsarnaev.

To counter the “threat” of an attractive terror suspect, a Boston police officer, Sean Murphy,

with some bloodied shots of Dzokhar Tsarnaev. “This guy is evil,” said Murphy.

is actually quite subversive to “war on terror”. Perhaps the US would be better off understanding what makes very ordinary people, good citizens in other respects, let off bombs, rather than have America spend billions on fighting wars abroad and spying on its own people, all in the name of fighting terror.

The Rolling Stone article does a good job to advance our understanding of the Boston bombing. The author Janet Reitman spent time with Dzokhar Tsarvaev’s friends and she portrays him as a caring American teenager from a struggling family. In the summer of last year he was lifeguarding at a Harvard pool. “I didn’t become a lifeguard to just chill and get paid,” he tweeted. “I do it for the people, saving lives brings me joy.”

Subsequently, perhaps under the influence of his older brother Tamerlan, Dzokhar seems to have become more alienated from America, to the point of justifying the bombing. Rolling Stone says Dzokhar admitted he did not like killing innocent people, but “the US government is killing our innocent civilians”, presumably referring to Muslims in Iraq and Afghanistan.

In some ways, Dzokhar’s apparent rationalisation for letting off explosives mirrors Barack Obama’s, when he orders drone strikes in Pakistan, knowing that most of those killed or wounded will be innocent civilians. For both men, civilian casualties are seen as an unfortunate overhead of the “war”.

It doesn’t help bring to an end this madness to portray either a Dzokhar Tsarnaev or Barack Obama as “evil” or a “monster”. Nelson Mandela is rightly considered as an icon who showed that there is a better way. He treated his antagonists in the brutal apartheid regime as human beings who could change and reject further violence and repression. To Mandela vengeance was not a solution.

If you treat others simply as “evil” or less than human you lose some of your own humanity.