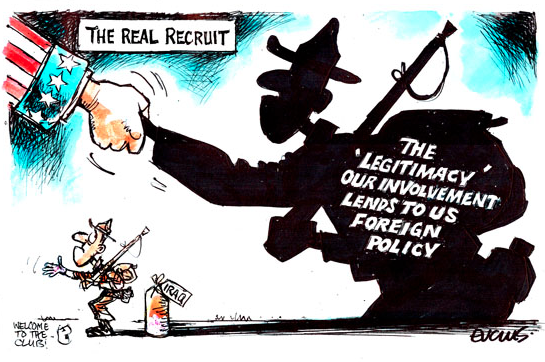 Do you “understand” what’s happening in a Middle East where bombing another country is a regular occurrence?

Let’s start with Saudi Arabia bombing Yemen. What has it achieved? We know it has destroyed Yemen’s main airport, much of the country’s infrastructure, and killed many civilians. We also know that it has had little impact on its main military target, the Houthis, who control much of the country. It may well have made them more popular. The other main beneficiary of the bombing has been Al Qaeda in the Arabian Peninsula, who have been left free to capture more territory in the south-east of the country. American planes used to bomb Al Qaeda in Yemen, but now Western media informs us that the main danger is the “Iranian-backed” Houthis. What the Houthis may or may not stand for is not reported – let me know if you ever find out. But being “Iranian-backed” is apparently a big no-no.

After all, America is still holding on to the “option” of bombing Iran, allegedly over a nuclear issue, and America’s close ally Israel is rearing to have a go.

But hold on a minute. Aren’t the Americans now supporting Shia militias in Iraq that are not just “Iranian-backed” but are actually “Iranian-led”. These militias captured Tikrit from Isis and are now trying to win back Ramadi.

There’s plenty of bombing going on in Iraq too. Those airforces having a go at Isis include the Iranian, American, French, Danish, Dutch, Australian, Canadian, Saudi, Emirati, Jordanian and Bahraini.

Has bombing Isis had much effect? No doubt many tanks and artillery pieces have been knocked out. But beyond that?? The damage to infrastructure and civilian deaths caused by the bombing is probably assisting Isis recruiting. It should also be noted that purposely targeting civilian infrastructure like oil refineries (which the US has admitted to) is a war crime. [Of course, this does not let the barbaric Isis forces off the hook. They are guilty of horrendous war crimes on a daily basis.]

Then we move to Syria, where for the last few years the Assad regime has been bombing its opponents. Some thought America should respond with its own air strikes, and this nearly happened when Assad was accused of using poison gas. Now America is bombing, not Assad but his strongest opponents, Isis and the other main jihadist force, al-Nusra. Now, when Isis captures the historic city of Palmyra and threatens to destroy the ancient ruins it is hard not to feel some sympathy for the defeated soldiers of the Syrian regime. But aren’t they baddies too? Weren’t we going to bomb them? Well, America’s ally Israel has been

, as well as bombing Lebanon and the Gaza strip. But to what result, other than the death of many people?

Israel’s other neighbour, Egypt, won’t be bombed because it is collaborating with Israel to keep the people of Gaza isolated from the outside world. Instead, Egypt did its own bombing, in Libya, after some Egyptians were executed by Isis forces. And as usual it was bombing to no good effect. Libya is a stunning example of the murderous stupidity of bombing campaigns. In 2011 thousands of Libyans were either killed or displaced as the bombs rained down from British, French and American warplanes.  It didn’t bring about democracy but a fractured state where the strongest militias now rule and fight each other.

The pilots dropping the bombs never see the havoc they reap: the broken bodies, the broken buildings and the broken societies. Neither do the governments and commanders that sent them on their way.

It’s easy to bomb another country. It’s easy cause so much destruction. Surely, there are better ways.

How to reduce violence in our prisons

Why the pundits got it wrong in Michigan