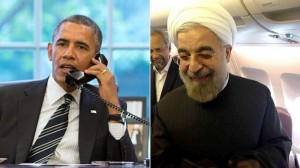 Hopefully, the reapproachment will also end the sanctions which have so hurt ordinary Iranians. The sanctions have dramatically increased prices, partly because a drop in the value of the Iranian currency, and party because of it has been so difficult to transfer money to pay for imports. Iran’s banks have been excluded from the SWIFT exchange, which carries most of the world’s financial transactions.

In his UN speech (and other public comments) the new Iranian president has made it clear his country does not want nuclear weapons and seeks good relations with America.

The ball is in Obama’s court now, because it’s pretty obvious there are no irresolvable problems, at least on the nuclear front. Iran is willing to have its nuclear energy sites subject to international inspection, and it shouldn’t be too difficult to reach an agreement on the amount of enriched uranium it stockpiles. Over three years ago Iran

with Turkey and Brazil to store some of its enriched uranium in Turkey, but this deal was scuttled by a hostile US administration. It’s encouraging that Iran is open to such deals, because under the nuclear Non-Proliferation Treaty Iran (like every other signatory) is permitted to enrich and store uranium – as do Japan, Germany, etc.

The real barrier to a settlement is a hard-right faction within the Washington establishment, which basically sings to the tune of the Israeli government. Both this Washington faction and the Israeli government scaremonger about the danger of Iran going nuclear, but their main concerns are actually non-nuclear. Israel’s strategic aim is to weaken Iran, because it is such a strong pro-Palestinian Middle Eastern power. If Israel was interested in Iran becoming freer it would welcome the overtures from the new Iranian president and his advocacy of democratic reform. Instead the Israeli leaders lambast Hassan Rhouhani as a wolf in sheep’s clothing.

There is hypocrisy all over the place. We are supposed to get all worried about Iran’s nuclear intentions, even though there is no evidence it has a nuclear programme. Yet Israel itself has the bomb. Iran supports UN motions for a nuclear-free Middle East, which Israel and the United States oppose. America insists on inspections of Iranian facilities, yet neither Israel or the US will allow inspection of its own nuclear facilities.