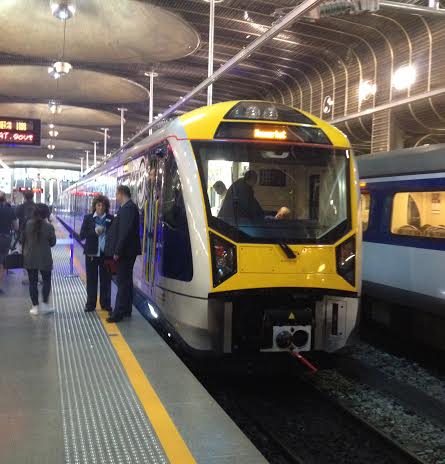 Everyone was smiling as the first electric commuter train rolled out of Auckland’s Britomart station this morning. The three-car set was quiet and quick, and the 57 electric trains are sure to increase patronage.

It’s been a long time coming. Electrifying Auckland suburban rail has been talked about ever since Christchurch (1929-1970) and Wellington (1938 to the present) electrified their suburban rail.

This century the Auckland talk got serious, with the Greens providing the political spearhead in Parliament. Auckland local bodies started putting electrification in their long terms plans. Back in 2001 I greeted one such plan with

under the heading: “Locke supports electrification of West Auckland rail line.” [I was the Green’s associate transport spokesperson at the time.]

Progress on electrification was slowed in the early 2000s by the complications of who owned what.

This started to be resolved in 200

2 when the government purchased Auckland’s metropolitan rail network from the privately-owned Tranz Rail. Two years later (after Tranz Rail had been taken over by Toll Holdings), the state purchased the remainder of the track – with Toll still owning and running the rolling stock.

In August 2005 the Auckland Regional Transport Authority picked up the ball,

, electrifying Auckland rail and an underground city rail link. The Greens added to the pressure on the government with an

, with placards, petitions and public forums. The Greens also had leverage with Labour under its

, where in exchange for the Greens not supporting a “no confidence” motion, Labour agreed to negotiate with Greens “increased capacity for public passenger transport.”

In May 2007 the Labour government came to the party, enabling the electrification to be funded out of an Auckland regional fuel tax. The project was put in doubt again when the incoming National administration cancelled the fuel tax. Later, however, National agreed to advance $500 million to KiwiRail to get the project moving again.

Now there’ll be 57 electric trains running on Auckland’s suburban lines, putting the pressure on for Auckland’s next big step  – an underground City Rail Link.  Britomart station has to move from being a terminus to being part of a city rail loop, otherwise it won’t be able to handle all the services the new electrified system can provide.