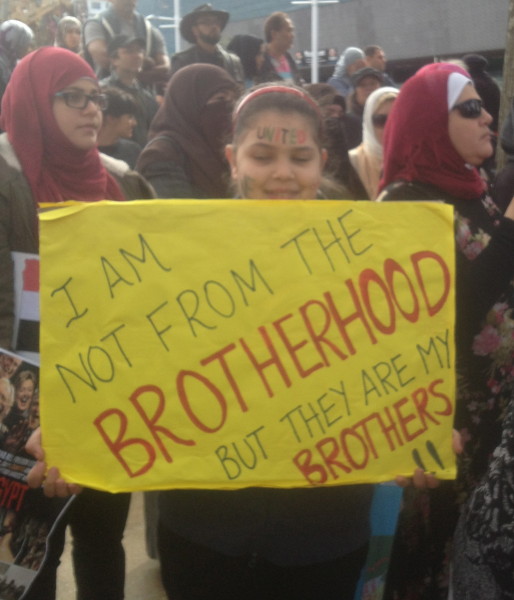 One sign particularly struck my fancy. It read: “I am not from the Brotherhood but they are my brothers.” It was carried by a young woman at a 200-strong protest rally in Auckland’s Aotea Square yesterday.

The young woman’s message was along the same lines as my speech to the rally, attended mainly by Egyptian New Zealanders, and others from Middle Eastern countries.

It is no longer a question of whether or not we agree with the Moslem Brotherhood. When people are being massacred by a military regime for exercising their democratic right to protest, then we must speak out. We must stand with them.

The brutal military crackdown is sliding Egypt back to the dark days of the Mubarak regime.

Unfortunately, many liberal-minded Egyptians were hoodwinked into thinking that the 3 July military coup would put Egypt on a better path to democracy. They had criticized the Morsi government for being intolerant and exclusive in the way it ruled. However to choose a military regime over a flawed, democratically elected government was a fatal error.

Democracy in all its aspects is fast disappearing in Egypt as the military shoots down Brotherhood supporters outside mosques, manipulates the media, and talks about banning the Brotherhood altogether.

Driving the Brotherhood back underground again (as it was in Mubarak’s time) would be a disaster. In 1992 the Algerian military deposed an elected Islamist government, and thousands were killed in the armed conflict which followed.

There has been an alarming reluctance among Western nations to call the military takeover by its right name, a “coup”. Until this week Western criticism of the coup leaders has been muted. Last Thursday (six weeks after the coup) our Foreign Minister Murray McCully finally put out a media statement expressing his “strong condemnation” of “the use of military force against civilians.” Other Western governments have now done likewise, and the United States has cancelled Bright Star, a joint US/Egyptian military exercise. However, if the US was seriously opposed to the military massacres it would halt its aid to the Egyptian armed forces, presently running at $US1.3 billion a year.

We read in an Israeli media outlet,

that “The US is in no hurry to stop its aid to Egypt, which would severely damage its relations with the Egyptian army. The Egyptians allow the Americans to move their military forces, quickly and almost without warning, over Egyptian skies and the Suez Canal, which is a necessity for its activities in the war on terror in the Horn of Africa, the Persian Gulf, Afghanistan, and the area of Israel and the Gaza Strip.” For the Obama administration, its own military interests come before the lives of the innocent people being gunned down in the streets of Cairo and other Egyptian cities.

Ending the killing in Syria with a political solution