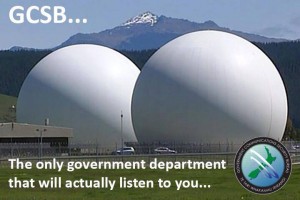 There are several unanswered questions, in the wake of the Snowden revelations, about the GCSB’s contribution to the US National Security Agency’s global surveillance programme.

1. What is the nature of the mass communications data collected by the GCSB at the Waihopai satellite communications interception station for the NSA’s Prism database? We know it includes information on millions of international phone calls? What else does it collect?

3. How much is the GCSB funded by the NSA? We have found out through the Guardian newspaper that the British Government Communications Headquarters is subsidised by the NSA? Is any subsidy of the GCSB in the form of cash or equipment, or a combination of the two?

4. What processing of the mass communications data does the GCSB do for the Five Eyes networks, and around what targets? Which countries’ communications are particularly targeted, and does this list include China?

5. What consideration has been given to the downside of the GCSB spying for the NSA on the communications of countries which are also our major trading partners, like China?

6. What access do GCSB operatives have to the NSA’s giant Prism database? Is it direct access, of the type that Edward Snowden apparently had, which we now know from the Guardian is via the XKeyscore NSA search system? Or do the GCSB’s questions have to be funneled through an NSA officer, either one resident in New Zealand, or one resident in the United States?

New Zealanders have a democratic right to know the answers to these question, because they deal with important matters relating to the privacy of our communications, our sovereignty and our foreign policy.