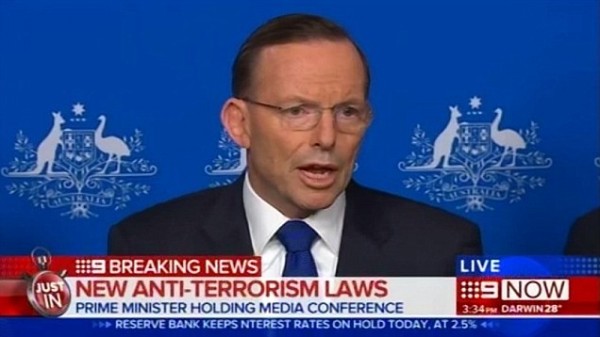 Freedom of travel is under attack. Travelling to a designated “terrorist” area is to be criminalised, unless you can prove a “legitimate” purpose. Of course, officials will be choosing which territories are off limits according to their own “Western-biased” political criteria.

You can be sure that the Abbott government won’t designate Israel a terrorist territory, even though, after slaughtering well over 1000 civilians in Gaza Israel should surely qualify it ahead of any Palestinian territory.

that the proposed laws are in practice an attack on Islam.

Freedom of speech is certainly under attack, when even a Facebook post favourable to an alleged terrorist will contravene the law.

Journalists can be incarcerated for exposing an Australian Special Intelligence Operation (SIO) even if there is something dodgy going on. Agents engaged in SIOs will now be permitted to circumvent the normal laws without sanction.

There are plans to require all telecom providers

to keep all communications metadata

for two years. This will enable intelligence operatives to gain a detailed picture of any Australian they happen to target, including anyone they believe is communicating with a “bad” person.

The powers of intelligence operatives to arrest people without a warrant and then detain and search them, will also be expanded. And it will be easier to take passports off Australians they suspect of some link to “terrorism”.

We will have to be alert to any similar moves on this side of the Tasman. Our anti-terror legislation is bad enough already. At least our SIS is different from Ausdtralia’s spy agency ASIO in that it doesn’t have arrest powers. Let’s keep it that way.