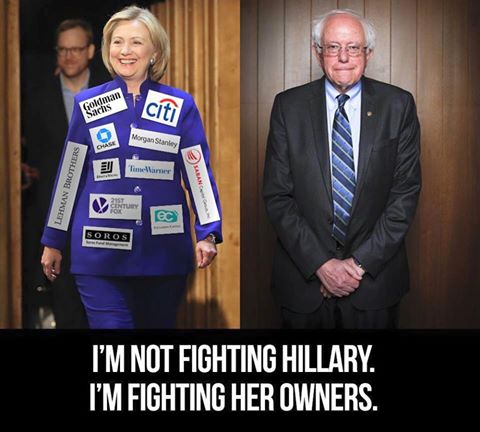 From day one the Democratic Party establishment has been trying to count Bernie Sanders out of the presidential nomination race, using every trick in the book. The party leaders have been readily assisted in this by a tame mainstream media.

On Tuesday (NZ time) the US media was telling voters in California and five other states that a vote next day for Bernie Sanders was meaningless because Hillary Clinton already had the numbers.   TVNZ, to its shame, followed the American media pack with a headline: “Hillary Clinton secures the delegates for Democratic nomination.”

Bernie Sanders disputed the Associated Press and NBC News tallies pointing out they were “lumping pledged delegates, i.e. real delegates, with superdelegates, who may or may not change their mind, but who do not vote until July 25

With such a media barrage that Clinton had already won its surprising that Sanders did as well as he did in the six primaries the following day. He won in North Dakota and Montana, was only two percentage points behind in South Dakota and New Mexico, and managed 43% in California.

Sanders is right to campaign right through to the final Washington DC primary and get every Convention delegate possible.   By doing so he keeps his movement together to fight at the Convention for a more radical Democrat policy platform, and a democratization of party rules, particularly around the running of primaries.

Sanders responds to “Bernie” chants at his rallies by pointing out that it’s not about him but about the mass movement he leads – against the billionaire class that rules America. How can he simply concede to Clinton when much of his campaign has been directed at her accommodation to the super-rich.

Being part of the corporate establishment also make it more difficult for Hillary Clinton to beat Donald Trump. Bernie Sanders has pointed out that “according to every national poll that I have seen and according to virtually every state poll that I have seen, Bernie Sanders is a much stronger candidate against Donald Trump than is Hillary Clinton.”  Technically, the 741 yet-to-vote Democrat superdelegates could recognise this and gift the nomination to Sanders. But this won’t happen. Partly there is a good reason: that the result of the primaries should determine the outcome. But there’s also a bad reason: that most superdelegates have been overly focused on defeating Bernie Sanders even though this helps Donald Trump.”

Robert Reich (once Bill Clinton’s Secretary of Labor and now a Bernie supporters) has eloquently summed up the continuing importance of the Sanders movement. In an Open Letter to Bernie he says that “regardless of what you decide to do now, you have ignited a movement to fight onward. We will fight to put more progressives into the House and the Senate. We will fight at the state level. We will organize for the 2020 presidential election.”

Reich wrote that “your message– about the necessity of single-payer healthcare, free tuition at public universities, a $15 minimum wage, busting up the biggest Wall Street banks, taxing the financial speculation, expanding Social Security, imposing a tax on carbon, and getting big money out of politics – will shape the progressive agenda from here on.”