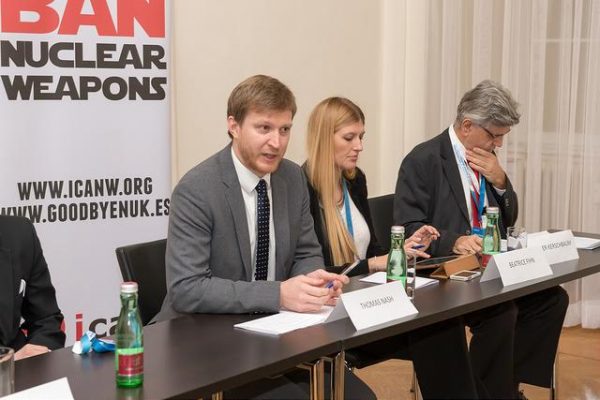 This weekend a ceremony is being held in Norway to present

the 2017 Nobel Peace Prize to the International Campaign to Abolish Nuclear Weapons (ICAN).

This was a timely award in view of ICAN’s role in laying the groundwork for signing this year of an international treaty to prohibit nuclear weapons, which puts extra pressure on the nuclear-armed states – who haven’t yet signed the treaty – to begin a full disarmament process.

New Zealand can take a bit of the credit for the success of ICAN, and the adoption of the international treaty. In 2011 Kiwi Thomas Nash co-founded the London-based NGO Article 36 which then joined ICAN. In 2013 Nash authored a ground-breaking paper

which proposed the new and successful strategy of pursuing an international treaty prohibition on nuclear weapons, even without the presently nuclear-armed states.

Nash, Article 36 and ICAN then worked around the world hosting meetings which acted as incubators to promote and develop the strategy to ban nuclear weapons through an international treaty.

After four years of solid work, with Nash playing a major role, this July a UN conference adopted a

Treaty on the Prohibition of Nuclear Weapons,

with 122 nations voting in favour (including New Zealand) to one against. Sixty nine nations didn’t vote – including all the nuclear-weapons states.

The New Zealand delegation to the UN conference included some experienced civil society campaigners, including Kate Dewes from Christchurch’s Disarmament and Security Centre.

New Zealand has a long history of active anti-nuclear NGOs, several of whom are involved in ICAN via their international parent bodies. These include the Women’s International League for Peace and Freedom, the International Physicians for the Prevention of Nuclear War and Pax Christi – all of whom are represented on the ICAN international steering committee.

only one of the nuclear weapons states, Russia

, is sending a high ranking ambassador. The other nuclear states are downplaying it – perhaps because they are embarrassed at their lack of engagement with a nuclear disarmament process.

Where next after “Bill of Rights” ruling that prisoners can vote?

Behind the damning State Services Commission report on our spy agencies