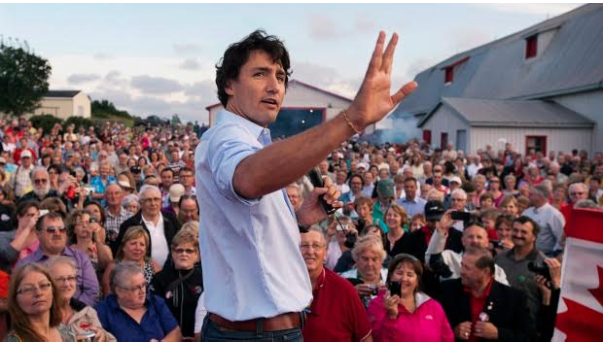 In the lead-up to the recent Canadian election, Liberal leader Justin Trudeau

keeps his promise now he is Prime Minister.

First-past-the-post is a bad match for Canada’s multiparty system. Canada has four major parties: the Conservatives, the Liberals, the centre-left New Democratic Party (NDP) and the Bloc Quebecois – plus a significant new entrant, the Greens.

In this multi-party context, first-past-the-post can produce huge election swings. For example, the Liberals went from 36 seats at the 2011 election to 184 in 2015.   They achieved a clear majority on less than 40% of the vote.

Tactical voting – often a feature of Canada’s feature of first-past-the-post elections – was most evident in this election. Voters wishing to get rid of the Harper government tended to plump for the candidate in their riding (be it Liberal, NDP, Bloc Quebecois or Green) who had the best chance of defeating the Conservative candidate. Up until the middle of September this tended to be the NDP candidate, given that party was leading in the national polls. The Liberals at that point were running behind both the NDP and the Conservatives.

Then Justin Trudeau tripped up the NDP by attacking its “balanced budget” approach, promising instead big spending on infrastructure (particularly public transport, affordable housing and green energy) in the first three years of his term. The Liberals were soon in the lead, and in a position to attract more tactical voters. Those opposed to the Harper government (some were confirmed NDP supporters) began to support the Liberal candidate in electorates where he or she was the best bet to defeat the Conservative candidate.

As a newer entrant, the Greens lost out as tactical votes went to the bigger players, except in the Saanich-Gulf Islands riding, where Green Party leader Elizabeth May was the incumbent. She was returned with 54% of the vote. This result indicates that with proportional representation the Green vote nationwide would be much higher than 3.5% achieved in this election. Under proportional representation people vote more positively for the party they have most in common with, rather than voting tactically.

Leaving aside tactical voting for the moment, the breakdown of seats won by the parties in 2015 is way out of kilter with those same parties national percentage of the vote. If vote percentages had applied to the result (as they are in New Zealand with the party vote), the Liberals would have won around 134 seats, not 184, and they would have needed NDP support to form a government. The Greens would have been entitled to 12 seats.

Trudeau’s push for a fairer voting system should be more successful than earlier attempts, because it will also have the support of the NDP and the Greens. Previous referendums were regional –

, and Ontario in 2007 – and were lacking in enthusiastic cross-party support for the options presented. The public education on the options was also limited.

The success of New Zealand’s MMP system is often referenced in the Canadian electoral reform debates. Our experience was directly injected into the BC debate in 2001 when the then NZ Green co-leader Rod Donald toured BC with the leaders of the Canadian pro-MMP campaign. In later years visiting NZ Green MPs continued to educate Canadians on the subject.

The creeping privatisation of mail delivery

Phillip Smith and the rehabilitation process