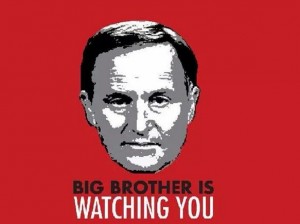 had to wait a year

to find out their home had been covertly searched by Police who took various items and copied their computer drives.

The search took place in January last year, but the Kleine’s have only just received a letter from the Police disclosing it.

At the time, January 2015, the Police were trying to find the author of a letter threatening to contaminate infant formula if New Zealand did not stop using 1080 poison for pest eradication.

While the Police are to be commended for tracking down the blackmailer – an Auckland businessman has pleaded guilty – the way the Police went about the investigation is concerning.

Anti-1080 activists like the Kleines were treated in an unnecessarily heavy-handed manner.

Not only was the Kleine’s home searched without them knowing in January 2015.

They were raided again in March.

Four unmarked cars pulled into their drive at 7am with search warrants, one for their home and one for Takaka Infusion, their vegetarian teahouse. Rolf was taken to Motueka Police Station and interrogated for six hours. Ute was taken separately to Takaka station and interviewed for four hours. They returned home to find the Police had left their place in a mess.

How many of the

the Police talked to during the inquiry had experiences similar to the Kleines? Such behavior was not the way to encourage cooperation from anti-1080 activists to help identify the offender.

under the Search and Surveillance Act

the Police don’t have to provide much justification for covert searches. All they need to do is tell a judge that to disclose the search would “endanger the safety of any person” or “prejudice ongoing investigations”.

The use of this provision against political activists does sound alarm bells.

technically the Police can wait 12 months

to inform people their home has been secretly searched there is absolutely no excuse for the Police to wait 12 months in the Kleine’s case. At the very least the Kleines should have been told about the covert January search when they were raided a second time in March and carted off to Police stations.

Not only is it spooky to think your home might be raided without you knowing. If the Kleine’s experience is anything to go by you might lose valuable items without even knowing they are gone. Some time after the March raid Rolf Kleine

. He contacted the Police, and yes they had it, but hadn’t told him they had taken it.

Why Bernie Sanders isn’t calling it a day

Criminalising thoughts not the way to combat terrorism