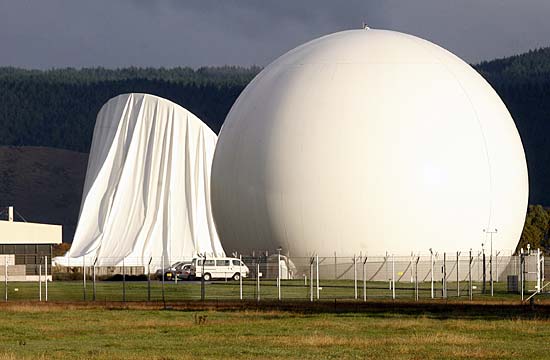 a couple of weekends ago. As far as our Court of Appeal was concerned Adrian (along with Father Peter Murnane and Sam Land) owed the Crown $1.2 million in damages for deflating one of the domes surrounding a satellite dish at the Waihopai spy base, back in 2008.

Mind you, the Crown might not have been able to extract $1.2 million out of the Waihopai Three. All three live pretty frugally. Father Peter Murnane has said that if you turned him upside down and shook him, ten dollars might fall out. Adrian Leason, his wife and eight children live fairly basically in Otaki. The family arrived at the Waihopai protest in an old home-made van. My impression is that Sam Land, living in Hokianga, isn’t particularly financial.

Yesterday the government gave up the ghost, and dropped the claim. But not just because it would have been hard pressed to get the money. The Waihopai Three had a good chance of winning their appeal to the Supreme Court. The Court of Appeal judgement was pretty weak. For example, it held that the Waihopai Three didn’t have a case unless they could demonstrate a direct link between their (symbolic) protest and saving a specific life. The Court of Appeal ignored the whole history of antiwar protest – from the Vietnam war onwards – where it is the combination of a lot of people protesting, in different countries, that stays the hand of the warmakers.

After the Snowden revelations the Supreme Court would also have been more aware of how instrumental the Waihopai station is for feeding phone intercept information to the National Security Agency to help it target the drone strikes which kill so many innocent people.

not guilty of criminal damage

, accepting (on the evidence) the political motivation for their action. The Waihopai Three case was assisted by evidence from a British whistleblower

, who in 2003 demonstrated that the Five Eyes network (which includes the GCSB) was spying on the “swing” nations in the UN Security Council (including Pakistan and Chile) to try to get the Council to support a US-led invasion of Iraq.

It was sour grapes for the Crown, after losing the criminal case, to then go the Waihopai Three for damages. They deserve to have fallen short.

Waitangi Day is a nice time to celebrate and salute the three brave Waihopai Ploughshares activists: Adrian Leason, Father Peter Murnane and Sam Land. Their watchword is from Isaiah 2:4: “They will beat their swords into ploughshares and their spears into pruning hooks. Nation will not take up sword against nation, nor will they train for war anymore.”

David could improve the Labour/Green relationship