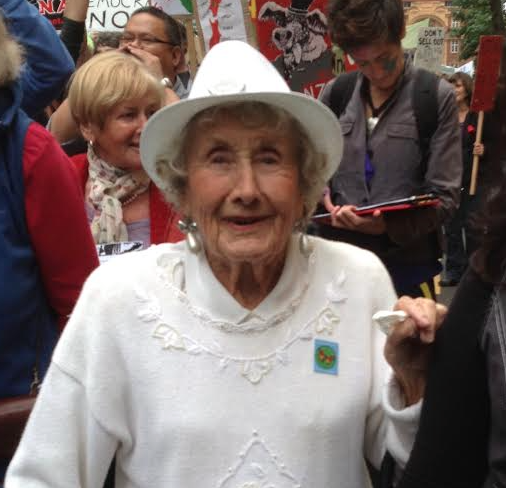 Photo: Marg Jones, then 91, on a protest against deep-sea oil drilling


Marg Jones never seemed old. Well in to her 90s she could be seen on all the big protests, or running a street or festival stall for the Soil and Health Association. She was always chirpy, her mood matched by bright and often rather outrageous outfits using the best op-shop materials.

Marg, who died this week, aged 95, should be honoured as our longest-standing campaigner for progressive causes.

ints out that Marg was at the organisation’s founding conference in 1941, when it was called the Humic Compost Club. But she would have been active on other issues before that. She came from a Communist family, her father Leo Sim being leader of the Communist Party for a period in the 1930s. Her mother and father encouraged boldness, which sometimes brought family members to the attention of the law. Her brother, Karl Sim, was a noted art forger. Her son Marx spent some months inside for flying over the All –Black-Springbok rugby test in 1981 and dropping flour bombs. Marg was proud of both men.

Solidarity was her watchword and for many years she carried the same placard on the various antiwar and workers demonstrations. The placard read simply: “Workers of the World Unite”. She was a true internationalist. I got to know Marg best when I was co-manager of Auckland’s Trade Aid and One World Books shop. She was a key volunteer, fully understanding of the need to help poorer communities overseas by providing an outlet for their crafts.

Animal welfare was also a big issue for her and she was a founding member of the Anti-Vivisection Society.

Marg loved teaching and well into old age was helping with the kids at a local West Auckland school. No doubt her generosity and spirit was infectious in the school setting.

She was also a great gardener.  And she always liked to dance. I remember her up on stage going for it when a Cuban dance troupe played in Auckland a few years ago. Marg wasn’t going to be left behind when the troupe invited audience participation in their final dance number.


A piece from the Waikato Times

five years ago catches her verve.

“Margaret Jones may be a 90-years-old but she has still got a great set of pins on her. The Auckland grandmother was at the Hamilton V8s yesterday to catch up with the boys from American rock band Good Charlotte, who performed last night at Seddon Park. She was dressed to match the rock-chick part wearing a short black dress and eye-catching black tights with huge Roxy earrings dangling from her ears…..”

Marg’s main lessons to us all are:

Don’t let age hold you back.

Keep doing things for others.

My condolences to all Marg Jones’ great family.

A celebration of her life will be held at the Te Atatu RSA, Saturday, 25 June, 1-4pm.