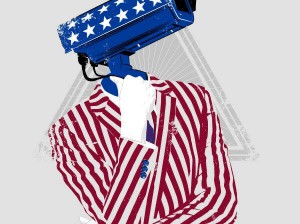 About a year ago I used Wikileaks’ website to find out what the US Embassy in Wellington had said about me in dispatches back to Washington. There were several references. The one that amused me the most reported the Embassy’s belief that I had “an incontrovertible and unwavering mistrust of United States foreign policy.”

I now know that people like me accessing the WikiIeaks site were being monitored by Britain’s electronic spies in the Government Communications Headquarters (GCHQ).

Our GCSB knew this was going on, and that all Kiwis searching the Wikileaks site were being monitored. The GCSB was told about it at

. A GCHQ Power Point presentation to that conference outlined how its “ANTICRISIS GIRL” program enabled “targeted website monitoring” of those accessing Wikileaks. [

, from the Snowden documents, can be found on a new investigative journalism website, The Intercept.]

Britain’s Privacy International has challenged the GCHQ over this. “How can targeting an entire website’s user base be necessary or proportionate,” its director, Gus Hosein,

. “These are innocent people who are being turned into suspects based on their reading habits.”

Greenwald and Gallagher report that the NSA has considered designating Wikileaks as a “malicious foreign actor”, which would then allow extensive surveillance of Wikileaks officials and supporters. Wikileaks’ American supporters would not be exempt from this targeting, but if this happened it would have to be mentioned in the NSA officers’ reports. One NSA document said that if the targeting was of “foreign individuals outside of the US and [who] do not hold dual citizenship…then you are okay”. In none of the documents is there any suggestion the citizens of the other four Fives Eyes countries (UK, Canada, Australia or New Zealand) are to be exempt from NSA spying. Any Five Eyes agreement not to spy on each other seems to apply only to the governments of those countries, not to their citizens.

It is probable that a lot more New Zealanders are being monitored by the NSA, mainly through internet surveillance, than are monitored internally by the GCSB – despite the new powers granted to our local spy agency under the GCSB Amendment Bill.

Many New Zealanders are being caught in the Five Eyes dragnet for reasons that have nothing to do with crime. Daring to access websites (like Wikileaks) that expose Western government wrongdoing might be enough to put you on a list of “suspects”. As Privacy International’s Gus Hosein says, “The fact that [UK] ministers are ordering the monitoring of political interests of Internet users shows a systematic failure in the rule of law.” It is a failure of the rule of law that New Zealand’s GCSB knows about, and is complicit in.