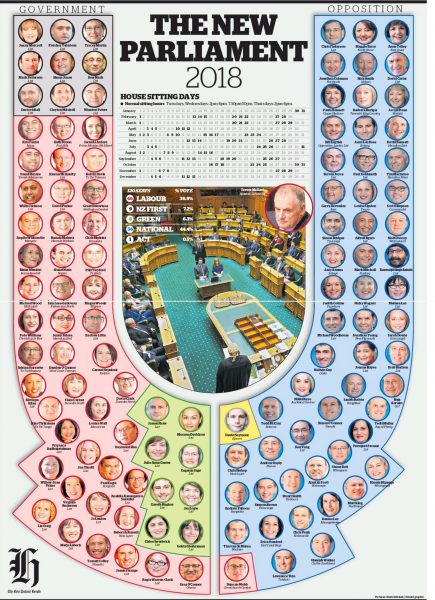 There are several reasons why it is wrong of the Green caucus to hand over some of their Parliamentary Questions to National.

Firstly, we have to understand the importance of Question Time. It is the main stage on which parties push their policies on the issues of the day through their MPs asking questions of Ministers, and the Ministers replying. The parliamentary press gallery closely monitors the exchanges.

As a small party with eight MPs the Greens only get about one of the 12 primary questions allotted to parties each day so it is never hard to work out a question to a Minister – whether it be a supportive or challenging one. When I was a Green MP (1999-2011) we always had a surplus of possible questions, and big battles between the Green MPs about whose questions made the cut.

Let’s look at an earlier period, 1999-2002, when the Greens had a Confidence and Supply Agreement with the Labour/Alliance government – similar to the Confidence and Supply Agreement the Greens have today with the Labour/NZ First coalition, although the Greens now have three Cabinet Ministers (outside-of-Cabinet). In that earlier time, Labour and the Alliance expected most of the Green questions to be challenging – on such topics as genetic engineering, the war in Afghanistan, welfare reform, free trade and investment treaties and counter-terrorism legislation. We didn’t hand over any questions to National because on many topics (such as those listed above) National was either in Labour’s camp, or to the right of Labour. One of the things that disturbs me most in yesterday’s Green press release is that National is labeled the “opposition”. National is not the “opposition” on the TPPA.  The Greens are. National is not the “opposition” to deep sea oil drilling. The Greens are. National and Labour support New Zealand being in the Five Eyes. The Greens do not. National and NZ First support keeping keep New Zealand troops in Iraq. The Greens do not. It is quite misleading to call National the “opposition”.

For two decades Green MPs have been explaining that the concept of an “opposition” and a “Leader of the Opposition” does not apply in an MMP Parliament.   A particular party’s ally on one issue can be their opponent on another. For example on some issues Labour is closest to the Greens, on others it is closest to NZ First and on others its ally is National.

Conceptually, the Greens are now both part of a governing arrangement, with three Ministers, but also an opposition on several important issues. Green parliamentary questions can legitimately be of several types.

Some can be “patsy” questions to allow a Minister to expand on some new progressive policy.

Some questions can help show what’s wrong with a right-wing National policy. Labour PM Helen Clark and I worked in tandem at Question Time to explain to the public why we needed to get rid of the air combat force. I asked, for example,  how many times the Skyhawks had been used operationally in the 40 years we’d had them. Helen Clark answered: None.

Some Green questions can push Labour to be a bit bolder. Currently, it would be useful to ask the PM or Corrections Minister what they are doing to loosen bail and parole procedures so we don’t spend $1 billion on a new prison.

And finally, there is nothing wrong with friendly but challenging questions on important issues where Labour and the Greens disagree – as on investment treaties and deep sea oil drilling. We wouldn’t be breaking new ground here. This is what we have been doing for years. Having three Ministers outside Cabinet doesn’t fundamentally change what we can do.

Other parties that have had Ministers outside Cabinet haven’t been as cautious as the current Green caucus about challenging the government at Question Time. Just look back at the Hansard from 2008 on and you’ll see that Maori Party MPs like Te Ururoa Flavell and Hone Harawira asked National Ministers a lot of hard questions on the use of tasers, the detention of Maori in the Uruwera raids, gun registration – you name it.  Having Tariana Turia and Pita Sharples as Maori Party Ministers didn’t slow them down a bit.

There is no justification for giving away Green questions to National.

New Zealand should never have joined the war in Afghanistan

Keith Locke being invested as a Member of the New Zealand Order of Merit, 20 April 2021

Don’t let NZ bureaucrats get away with political censorship