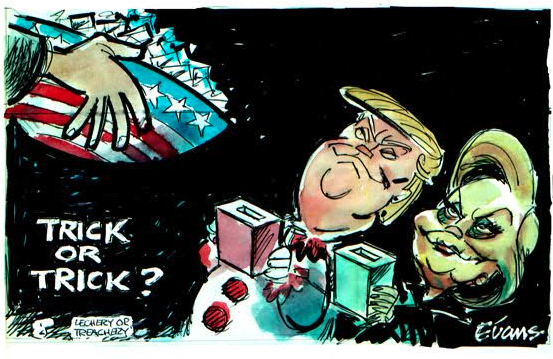 for the US presidential election shows up how third parties are disadvantaged by the one round, first-past-the-post race.

Kumar’s frequently-used app allows Clinton voters in a solid Democrat state, like California, to swap votes with a third party voter in a “battleground state”, like Florida. The idea is that third party voter now votes for Clinton, in exchange for the Clinton supporter voting for a third party candidate like the Greens’ Jill Stein. Clinton gets an extra vote against Trump in a key state, and the Greens keep up their national tally.

Of course it would be much better to have a two rounds system, like France, where in the first round where all parties have a fair go, followed by a second round between the two leading candidates. Or there could be an STV preferential system, as we have for mayor in Wellington and some other towns.

Lots of progressive Americans want Hillary Clinton to beat Donald Trump, as seems likely, but are also quite opposed Clinton’s pro-corporate, pro-war policies. The threat of a Trump presidency is pushing them to vote for Clinton, even when they’d be more in tune with the “Jill Stein for President” platform.

The Greens have run a good and necessary campaign, raising issues that really need to be raised if, as likely, Clinton assumes the presidency.

wrote a piece for the Guardian

acknowledging the fears of a Trump presidency and his ability “to wreak considerable havoc if elected.” But they point out that “Hillary Clinton represents the entrenched interests of the status quo. Her election will expand the excesses of global interventionism and corporate welfare that have characterized US policies for several decades.”

Stein and Baraka argue that Clinton’s “waffling on the TPP – gives credence to the belief that she will sacrifice the welfare of workers here and abroad for the unfettered profits of the business elites whom she has always served.”

. For example, they promise to “cut military spending by at least 50% and close 700+ foreign military bases” and put the money saved towards “medicare for all” and “tuition-free, world-class public education.”