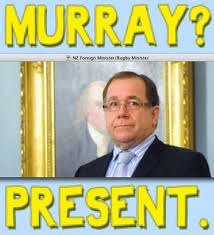 It’s common for governments to spin a story to make the indefensible sound defensible. Usually it is the government putting the best light on some commonly agreed facts.

But when it comes to intelligence issues the spin takes a different form.

Firstly, we are told we don’t need or deserve to know what the facts are – because they are secret. Trust us, they say, we know what we are doing.

Secondly, if another party (such as Edward Snowden) discloses facts that appear damaging, we are told it would not be appropriate for the government to comment. Matters of national security have to be kept confidential.

Thirdly, to throw us off the track, governments often suggests the leaked documents may be wrong, fabricated, misinterpreted or dated. But they can’t tell us more because secret matters can’t be discussed in public.

In this regard the statement last week from Foreign Minister Murray McCully was a classic. He was

, Robert Iroga and Philip Tagini, regarding the GCSB’s targeting of their emails – as disclosed by Nicky Hager and Ryan Gallagher using the Snowden documents. Iroga said “McCully should be ashamed of himself for spying on our people” and Tagini said the spying on government officials was “deplorable” and “not acceptable.”

that “the government will not be responding to claims made from documents stolen by Edward Snowden. The Snowden documents were taken some time ago and many are old, out of date, and we can’t discount that some of what is being put forward may even be fabricated.”

The documents could be “fabricated”? McCully shouldn’t be allowed to get away with that, particularly when he has ready access to the originals of the very documents Hager and Gallagher refer to.

“the [January 2013] target document was prepared by a named GCSB officer living in Wellington.” Also, no-one has yet proven any of the Snowden documents to be fabricated.

This sort of official obfuscation isn’t working so well as some of the more powerful targets of GCSB spying get into the game. I’m thinking particularly of China. It is certainly watching developments. Its Foreign Ministry responded the same day Hager and Gallagher

reported in the NZ Herald

that the GCSB was spying on China. On 11 March Foreign Ministry spokesperson Hong Lei said “China is concerned about the relevant report” and went on to talk about the importance of cyber and information security.” Thanks to Fran O’Sullivan for

bringing this to our attention

Companies like Fonterra should take note. China’s reaction to the GCSB spying on it may turn out to be more damaging to Fonterra’s trade than the odd scare around milk safety. One little way for ordinary Kiwis to help be part of the solution is to sign my petition apologising to China (and several other Asia/Pacific governments) for the GCSB spying on them. It is called a “Not in Our Name” petition

and is at this link

How the Waihopai Three beat the Crown