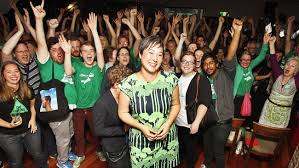 As in New Zealand, it’s always been hard for the Aussie Greens to win electorate seats. But in Saturday’s New South Wales election they

(and maybe four after postal votes are counted).

The Greens Jamie Parker was re-elected in Balmain, a Sydney inner city seat, and his colleague

in the neighbouring seat of Newtown. Leong gained a lot of credit for opposing the projected WestConnex motorway which would have so damaged the community. As in New Zealand, the Aussie Greens are strong on public transport and cycling alternatives. Labor prevaricated on WestConnex, as they do on other hot issues, like marriage equality and the treatment of refugees. Jenny was also pushing strongly for better education funding, new affordable housing and rent controls.

Even more dramatic was the

Green victory in the north-east seat of Ballina

, which the Nationals won previously by a 24% margin. The Greens Tamara Smith was riding a wave of opposition to plans to extract coal seam gas from the region. When I was in the area a year ago a common sign at a farm entrance was “Lock the Gate to Coal and Gas Companies”. It was a truly mass rural campaign the Greens tapped in to.

Ballina is a bit like the Coromandel electorate, which Green co-leader Jeanette Fitzsimons won back in 1999 (although it went back to National the following election). Mining was a big issue in Coromandel too (even if it wasn’t about coal seam gas). Many Coromandel voters had backed the No Mining campaign and were more attuned to Green messages.

The seat neighbouring Ballina, Lismore, might also fall to the Green candidate Adam Guise. At the time of writing Guise was neck and neck with the National candidate.

The Greens also had