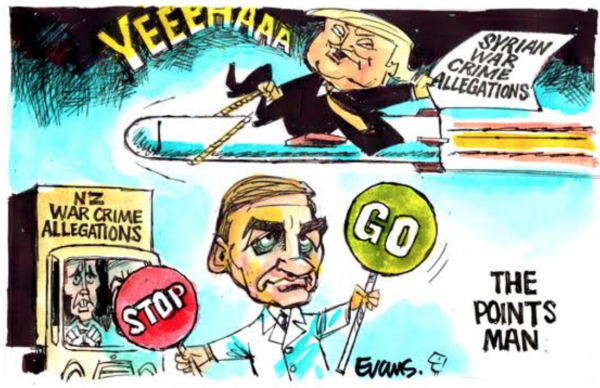 “unable to act at all on Syria”

In fact, Trump’s raid was aimed at preventing UN Security Council scrutiny of the chemical weapons attack which had taken place barely two days before.

Prior to the US missile attack the Security Council had been in session with two proposals before it. The US proposed an immediate condemnation of the Assad regime, while the Russians wanted the UN to allow time for an independent investigation of the chemical attack. Even though the Russians are protective of the Assad regime, their request for an investigation was a reasonable one, and in accord with normal UN practice.

Trump’s green light for the raid had little to do with helping the Syrian people, and more to do with boosting his public standing as a “strong” leader. This worked, with much of America’s “liberal” establishment (including Hillary Clinton) backing Trump’s “decisive” action.

One reasons for taking the time for a UN investigation is that the chemical weapons attack, if conducted by the Assad regime, doesn’t make much sense. The regime is certainly capable of heinous acts, but why would it resort to chemical warfare, drawing global condemnation, just days after the US had in effect accepted Assad’s hold on power, saying it was

“a political reality that we have to accept”

? That being said, dictators sometimes do stupid things, contrary to their own interests. Someone associated with the Assad regime is still the most likely culprit, but let this be tested by a proper inquiry. Even the announcement of an inquiry would inhibit the guilty party from launching another chemical attack.

The rapidity with which Bill English fell in behind Trump’s unilateral strike on Syria shows how little the NZ government values the UN Security Council, despite just having completed two years on it. New Zealand sidelined the Security Council and supported a US strike contravening the UN Charter. Article 51 of the Charter allows one nation to strike another only in “self-defence”. America wasn’t being attacked by Syria.

The NZ government still talks about having an “independent foreign policy”, but these days it is hard to locate that independence.