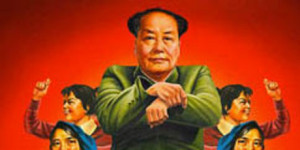 welcome being bombarded by commercial advertising but I was pleased this week to see Powershop’s “Chairman Mao’s Gangnam Style” posters plastered all over Auckland City.

It was a justified Powershop response to Auckland Transport’s banning of the energy company’s satirical posters from its bus stop advertising.

Auckland Transport’s Sharon Hunter was worried that the advertisement

“may potentially cause offence to Auckland’s Chinese population.”

Is Sharon Hunter trying to say Auckland’s Chinese don’t have a sense of humour? How very patronising? In fact, the theme of a satire would resonate with the many Chinese New Zealanders not enamoured with the regimentation of the Mao period. They would identify with the “gangnam-style dancing” sendup. The subtext of the ad’s slogan, “Same Power – Different Attitude” is that consumers should loosen up and make their own choice of an electricity provider.

It is most disturbing that non-elected city officials think they can exercise the power of political censorship, in this case to stop an advertiser making fun of an authoritarian leader.

It undermines our democracy when officials think they have to protect Chinese leaders (in this case a former leader) from public criticism. But it has happened many times over the past few years.

In 1999, Police erected roadblocks in

(a spiritual group banned in China) after receiving a letter from the Chinese consulate. Falun Gong floats have also been banned from parades in

. Even our universities (supposedly havens for free speech) have been scared of upsetting their Chinese counterparts. In October 2009 Auckland university administrators

for the exiled leader of China’s Muslim people, Rebiya Kadeer. The meeting had to be shifted to another venue.

There needs to be a strong public reaction every time New Zealand officials think they can act as censors for the Chinese government.