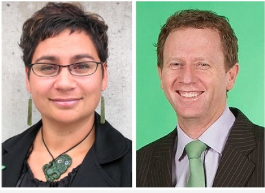 many commentators have argued

that the Greens are too left-wing and the party would do better if it moved to the political centre.

Most of these commentators endorse the Greens’ strong environmental stance, but say the party’s social and economic policies are too radical.

On the positive side, such comments implicitly recognise the success Greens have had in raising environmental consciousness among New Zealanders.

But they also show that developing environmental awareness is not always accompanied by an appreciation of the radical social and economic measures required to deal with the ecological crisis.

He argues for a blue-green party which “must be centre, its policies must be palatable to either National or Labour.”

However, a truly green party can’t avoid taking stands to the left of both Labour and National when both those parties are reluctant to bring to heel the main corporate despoilers of our environment.

Why shouldn’t the Greens be to the left of Labour and National when both parties:

Contrary to what many critics are saying, Green policies on social justice, peace and human rights reinforce rather than detract from the party’s environmental stance.

Critics of the Greens commonly see politics through a “two-party” lens, even though we are now seven elections into a proportional MMP system. Twenty eight percent of the electorate has just voted for parties other than National and Labour. The percentages for both National and Labour might continue to decline, as they did in this election (compared with with 2011). We are moving towards a European-style multi-party parliament where several parties (including the Greens) end up as significant players. It is not helpful for any of the (presently) smaller parties to be seen as clip-ons to either Labour or National.

Right from the time greens first entered New Zealand politics, as the Values Party in 1972, they have never seen themselves as a clip-on environmental party. The Greens actually have a more comprehensive approach to the critical human and environmental problems than either Labour or National. On quite a few issues Labour has a dollar each way, not wanting to offend, on one side, progressive minded people, and on the other side, the corporate establishment.

The Greens were right to advocate for a Labour-Green government, because Green policy overlaps more with Labour’s than National’s. But this doesn’t mean Parliament is divided simply into those that are with National and those who side with Labour. To think this way is contrary to the ethos of a multi-party political system. The Greens should be willing to work equally with all parties when there is common policy ground. On some issues this means working with National. On others it can mean working across the spectrum with smaller parties, however “right” or “left” they may be. In 2007, when I was a Green MP, I organised a press conference with ACT, United Future and the Maori Party which succeeded in pushing a hesitant Labour-led government to abolish the sedition laws. The Greens ability to do this sort of thing is enhanced if its MPs act respectfully and collegially with all other MPs including, this term, the leaders of the National, ACT, United Future and the Maori Party.

The beauty of the a diverse, multi-party MMP parliament is that most New Zealanders now believe they are being represented by a party which has views close to their own (although those who voted Conservative or Internet Mana will now feel left out, because our party vote threshold is too high).

A Green move to the centre in pursuit of Cabinet posts would betray all those who have just voted for the party’s left-of-Labour policies. The nearly 11% who voted Green would no longer be properly represented in Parliament. That would be a big blow to the credibility of MMP.

A Green move to the centre would also slow down progressive change, including protection for the environment. The ultimate driver of good change via Parliament is not the composition of a Cabinet but public opinion. New Zealand didn’t turn its back on mining the conservation estate because the right people were in a National cabinet. Public criticism, which Green MPs helped mobilise in protests, was the primary factor. Which party would be there to argue against New Zealand getting involve in America’s Middle Eastern wars (environmentally destructive among other things) if the Green Party shifted towards the political centre?  Both National and Labour, to their shame, committed special forces to Afghanistan, and support America’s new bombing campaign in Iraq. The Green Party has a vital peace advocacy role, on behalf of a big chunk of New Zealanders.

New Zealand will be poorly served if all its parliamentary parties try to crowd the centre, largely upholding the status quo and not adequately addressing the real social, economic and environmental problems that we face.

How much does the NSA subsidise the GCSB?

Flying the flag for West Papua