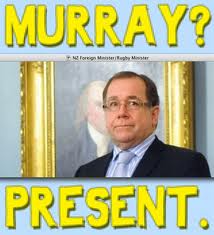 calling for an “independent and credible international inquiry mechanism” into the 2009 Sri Lankan army massacre of up to 40,000 Tamils, for which no-one has yet been held accountable.

The resolution, initiated by the United States, also expresses “serious concern” at continuing reports of “sexual and gender-based violence, enforced disappearances, extrajudicial killings, torture and violation of rights to freedom of expression, association and peaceful assembly, threats to judicial independence and the rule of law, as well as intimidation and reprisals against human rights defenders, members of civil society, lawyers and journalists.”

You would think there is a strong enough argument for an independent international inquiry.  But not for our Foreign Minister Murray McCully. While visiting Auckland this month, the Sri Lankan Foreign Minister GL Peiris

made a point of thanking Mr McCully

Murray McCully know full well that all attempts for a valid “internally driven” investigation have been thwarted by the Rajapaka regime, which is directly responsible for the 2009 massacre. Even McCully’s

that there is “ongoing discrimination against the Tamil minority” and that “freedoms for civil society and media are increasingly restricted.”

Even this month’s 5th anniversary commemorations for the Tamil victims of the massacre have been outlawed.

Last week, in the Tamil city of Jaffna

, provincial councilors lit camphor lamps outside their office to remember the dead, but these were stamped on by Police.  Meanwhile, the regime has just held a triumphalist military parade to celebrate the anniversary of its victory.

: “No wise country celebrates war victory after a civil war.”

At least in New Zealand we are free to commemorate the dead. Last night I spoke at a sad Tamil function in Auckland. Many in the room had relations who died in the 2009 massacre.

Why is our Foreign Minister so craven towards the Rajapaksa regime?  Basically, Mr McCully is trading concern for human rights for economic and diplomatic advantage.  At their Auckland meeting the Sri Lankan and New Zealand Foreign Ministers signed up to a dairy joint venture and an airline access deal. No doubt Mr McCully was also trying to swing Sri Lanka’s support behind New Zealand’s campaign for a seat in the UN Security Council.  But if our government is so amenable to trading away concern for human rights, does it really deserve a Security Council seat?